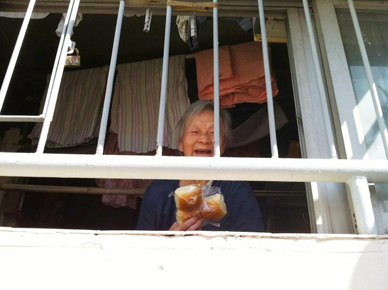 Received the largest donation from a single donor: >3,000 croissants from FB Solutions, thanks to the boss Etienne Gad!  They were given to elderly homes in Shatin, Yuen Long, Sham Shui Po and various elderly nursery care centers in New Territories.

Special Christmas message and packaging for Christmas goodies for the elderly.  Breads and cookies.  Out of town friends on holidays here volunteered in distribution.

Visited cage home.  Witnessed first-hand how humans live in conditions much worse than domestic dogs, and yet the rents are the highest per square foot in Hong Kong, possibly even the world!  Heart broken and grieved at the plight of these poor neglected elderly.

Discussion with Four Seasons Hotel for its donation of breads and pastries to Giving Bread!  Credit goes to Pastry Chef Gregoire Michaud for believing in it and pushing all the red tapes to make it happened!

Founder of Giving Bread went on solo distributions of breads to housing estates and public parks in Shau Kei Wan.  Apprehensive in the beginning, but very humbled and emotional after the distribution.  To receive is humility.